The trouble with the news is that the focus is on what is new — what’s happening now. We sometimes get analysis that allows us to see the bigger picture, but even that is fairly limited. In the end, the news can leave us feeling apprehensive, even outraged, because so much bad stuff is happening and there is nothing we can do about it. 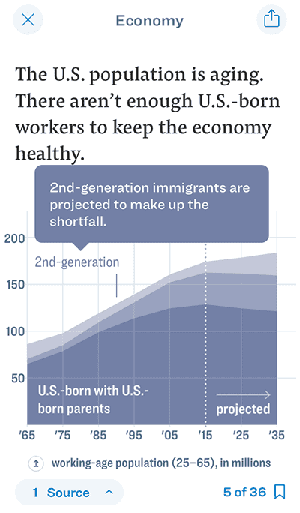 A snippet from Sift on the topic of U.S. immigration

Making things worse are those who take advantage of the situation by offering quick-fix political solutions designed to make us feel like something is being done. This helps governments stay in power and helps opposition parties win power. It helps us not at all.

The makers of an app called Sift News Therapy believe that we need way more context. For example, when you’re reading about the latest tragedies and controversies at the U.S.-Mexico border, what you really need to know about is immigration policy.

This is a much bigger topic, covering a lot of territory. But if you learn something about it, you’ll find that there isn’t really much in the way of news at all. Much of it, in different forms, has happened many times before. Opportunists have been whipping up anti-immigrant sentiment for hundreds of years.

Sift looks at U.S. immigration policy in two parts: the economy and cultural identity. In each section, you swipe through pages with snippets of information that together leave you much better informed.

Included are interactive charts, tables and quizzes — all of them nicely designed. And along the way are deep dives into related topics such as the tech industry.

Backing it up are credible sources. For example, the two for entrepreneurship are the Americas Society and the Center for American Entrepreneurship.

When you’re done with a topic, you can check in with your anxiety level. After reading about immigration, I chose the lowest.

The other topic currently available is guns. Coming up are climate, education, heath care and media literacy.

Is it worth it? Well, for one thing these topics are covered very much from an American point of view. If you’re an American, that’s great. If you’re a Canadian who gets their news from CNN and the New York Times, it could also be great.

I’m kind of surprised at how many apps are asking for subscriptions — sleep apps, yoga apps, meditation apps. And now news apps. Where does it end? How much are people willing to pay?

The old journalist in me hopes that a lot of people are indeed willing to pay for the news. Good journalism requires good journalists, and they don’t come cheap.

The other problem for Sift is that it is a new. Will they get around to finishing those other topics? Can we count on them to create new topics on a regular basis? You might want to wait and see before paying. But if everyone does this, the lack of cash flow could kill Sift before it has a chance to prove itself.

The company behind Sift is All Turtles Corporation, which funds startups with a focus on technology. They cite a study from the Pew Research Center that shows most Americans suffer from news fatigue. Their own study shows that people feel less anxious and overwhelmed and more informed after using Sift.

If true, I hope they succeed.